The pursuit to stay young, fit, and attractive dates back to the beginning of time. With the help of science, man harnessed the power of nature and produced helpful supplements in the form of pills and creams. This gave rise to a multi-billion industry for dietary supplements, expected to grow even bigger by 2025 at $194.63 billion.

Dietary supplements are not meant to replace food and the nutrition gained from consumption. They instead serve to add to the nutrition that may be lacking in local food diversity, or to help deliver a nutrient that is not easily absorbed or digested by the body due to health concerns. These supplements cannot replace exercise, a proper diet, and a healthy lifestyle, so it still pays to be wary of extravagant claims of instant results.

Weight loss and metabolism boosting pills are categorized under dietary supplements and don’t need a doctor’s prescription to be purchased. Due to the lax regulation on food supplements, many products often do not have verifiable claims or enough clinical trials, and may even contain subpar ingredients and fillers.

Weight loss pills differ in function and promises. Some pills act as a laxative that allows you to temporarily lose water weight. Some reduce your absorption of macro-nutrients such as fat. Some pills may boost your metabolism or tap into your unused calories, while some can make you feel fuller and less prone to hunger. Others may do any combination of the previously mentioned functions.

Diet Spotlight, a trusted online evidence-based review site of all fitness and weight-loss related topics under the sun, started selling their own weight loss pill. They went through several different name changes and formula improvements before settling on what is now known as the Burn TS® Advanced Weight Loss Formula. The pills are initially offered as a free trial directly from the website but can also be bought on Amazon. Let’s break down the pros and cons of this product. 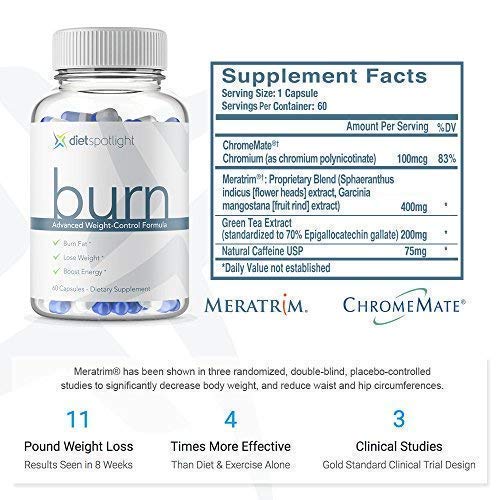 Meratrim was invented by researchers from medicinal herbs in the pursuit of an effective blend that can affect metabolism. They narrowed down candidates to two herb extracts from the East Indian globe thistle flower (Sphaeranthus indicus) and the mangosteen fruit (Garcinia mangostana). The resulting blend contains a ratio of 3:1 of these herbs.

A double-blind clinical test saw that participants who were given Meratrim experienced significant weight loss, which also brought about a lower lipid profile. It does three things within the body: it inhibits the production of fat cells, reduces the amount of fat absorbed into fat cells, and helps burn stored fat. One Burn TS capsule contains 400mg of Meratrim.

ChromeMate is a trademarked chromium bound in niacin to form a single molecule complex. This patented Chromium complex was created for better and faster absorption. The body only needs chromium in trace amounts and is a commonly used glucose for diabetics and pre-diabetics. It also regulates cholesterol levels and is used by people who are obese or have binge-eating disorders. One Burn TS capsule contains 100mcg of ChromeMate. 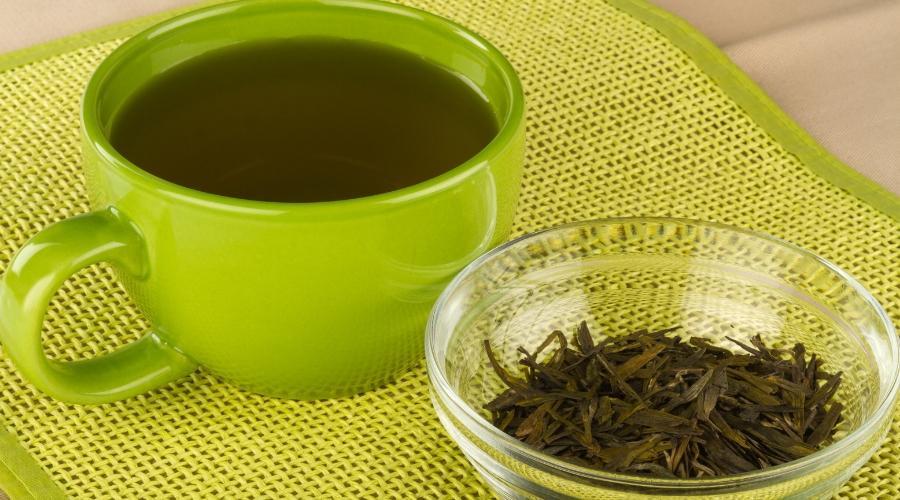 While green tea is more known for its antioxidants that are preserved due to less processing, the main stars of green tea extract are EGCG and caffeine, which aid in the regulation of body weight. EGCG is a polyphenol that promotes fat metabolism by promoting enzymes in the body that help break down fat. This effect is considered more effective when coupled with exercise. One Burn TS capsule contains 200mg of green tea extract, an acceptable dose that will not cause signs of hepatoxicity.

The caffeine in Burn TS is natural and USP grade, which means it’s pure by United States Pharmacopeia standards. It works by stimulating adrenaline production. Adrenaline signals cells to break down stored fat and release them into the bloodstream, though this doesn’t necessarily make you lose weight unless you couple it with exercise and less calorie consumption.

Caffeine also works another way to help with weight loss. Even at rest, our body still burns calories though at a lesser rate. Those calories are used to produce body heat and internal body functions. A clinical study showed that 100mg of caffeine increased the resting metabolic rate and body heat produced in post-obese participants by 3 to 11%. One Burn TS capsule contains 75mg of caffeine. 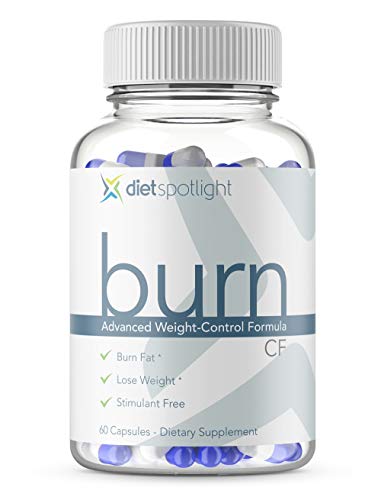 A caffeine-free variant of Burn TS is also available for people who wish to avoid it. It only contains Meratrim, ChromeMate, and green tea extract.

The company claims that the formula of Burn TS is gluten-free, non-GMO, contains no artificial ingredients and fillers, and is tested by third parties for purity.

Due to the Burn TS formula being proprietary, meaning it uses trademarked proprietary ingredients, the company is not required by law or any court to reveal its complete and exact blend as it is considered a trade secret. We only know that it has four main ingredients that target weight loss, but not about any possible preservatives or stabilizers included. We also cannot determine precise doses of the ingredients and we cannot know for certain what TS stand for.

Chromium improves the production of insulin in the body, but while it could be beneficial for people with diabetes, further studies are still needed to determine its efficiency in weight loss. Published studies currently available for consideration show conflicting results. It’s even possible to find studies that claim how chromium, when taken orally, is ineffective for weight loss. Some studies say that any resulting weight loss is insignificant, while other research studies claim that it is effective for obese people.

Green tea is also not a certified weight loss substance. Several studies support that it only has minimal weight loss effects even at higher doses. A dose of 800mg or more may start to damage the liver. In a 2016 clinical study, the group of obese women who were administered the extract only lost 2.4 pounds in 12 weeks compared to the placebo group that lost 4.4 pounds.

Caffeine may cause temporary side effects in some such as restlessness, nausea, diarrhea, heart palpitation, fatigue, and anxiety. The Burn TS Caffeine Free variant may not even be totally caffeine-free due to the green tea extract it contains. However, green tea does not contain much caffeine when compared to coffee and other stronger teas.

Furthermore, there are no known or published clinical trials on the actual Burn TS product. Even the website only relies on the clinical study on Meratrim to verify its claim.

A quick look at the official Burn TS Amazon listing currently shows a rating of 3.4 stars with 638 customer reviews. 58% of these reviews gave the product 5 stars, 5% gave it 3 stars, 4% gave it 2 stars, and 16% rated it only 1 star. Reading through the reviews, most of the top positive reviews are from people who use Burn TS in conjunction with exercise and dieting. Some even claimed that it has suppressed their appetite and hunger.

Some reviewers mentioned that Burn TS is even better than Hydroxycut, which gives them heart palpitations and restlessness along with either the same or better results. 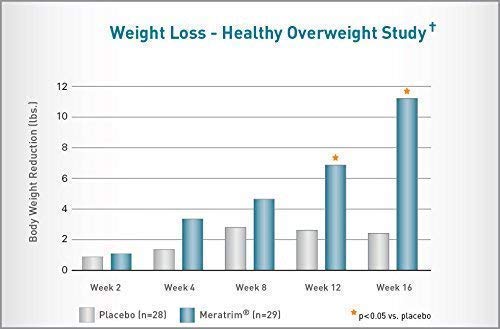 Most negative reviews revealed that there are a number of people who have taken more than one bottle of Burn TS to no avail. It is not mentioned whether they paired it with exercise and dieting.

The reviews also revealed that Burn TS can cause nausea, vomiting, heartburn, and diarrhea. Many reviewers were discouraged by the price of one bottle at $58.37, or 97 cents per capsule, not including shipping. Many reviewers claim that this price is unfair compared to the ingredients contained in each capsule, which can be purchased individually for cheaper. However if you purchase them separately you would have to mix and create your own pills which does not seem cost effective in the long run.

A controversy surrounding Burn TS and Diet Spotlight is the free trial program offered from the main website. Signing up for a free trial automatically enrolls you to an auto-shipping program. This also automatically charges your account each month for the cost of the product plus shipping, totaling $63.37 or more. Many people have had difficulty cancelling this subscription and even find themselves paying for an additional restocking fee and return shipping.

Due to this controversy, it is recommended that you don't purchase Burn TS from their site using the free trial unless you know you will be using it for several months.

With mostly positive reviews, Burn TS does show promising results, but only if you also maintain an active, healthy lifestyle which is essential to long  term weight loss. Burn TS is not a magical nor instant remedy for weight gain. Before purchasing a bottle, it’s best to consult with your doctor to discuss any health concerns that may or may not be affected by the formula’s ingredients.

Buy from Amazon.com
Previous
Next