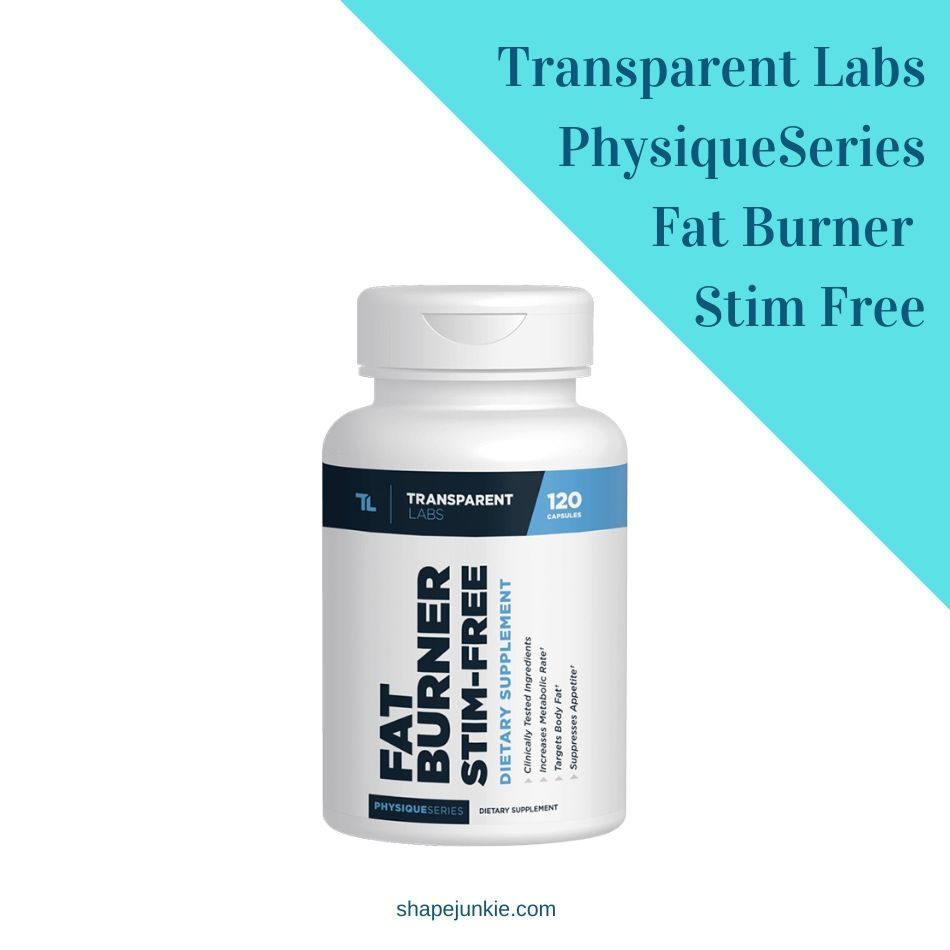 Transparent Labs PhysiqueSeries Fat Burner Stim Free is a major new product from Transparent Labs. It is a stimulant-free fat burner with a science-based formula designed to burn fat, control hunger cravings, and enhance metabolic support. It is designed to be helpful for both athletes and bodybuilders in achieving their goals.

Transparent Labs aims to deliver the best supplementary products in the athletic field, with 100% formula transparency. The company's approach to supplementation is science-based, being entirely focused on study-approved ingredients at clinically effective dosages. The company has also fully committed to never using artificial sweeteners, food dyes, or harmful additives.

Why use fat burners?

Fat burners can play a major role in enhancing fat loss in athletes, although Transparent Labs is at pains to point out that this will only conceivably be achieved in conjunction with a proper diet. Fat burners bring several different qualities to the table in order to ensure that weight loss can be achieved rapidly. Taking fat burners can help boost energy, curb appetite, promote fat to be used for energy, and even increase the metabolism and core temperature of athletes. This means that you burn more calories throughout the day, and weight loss goals are consequently easier to achieve.

Transparent Labs Fat Burner Review - How does it work? 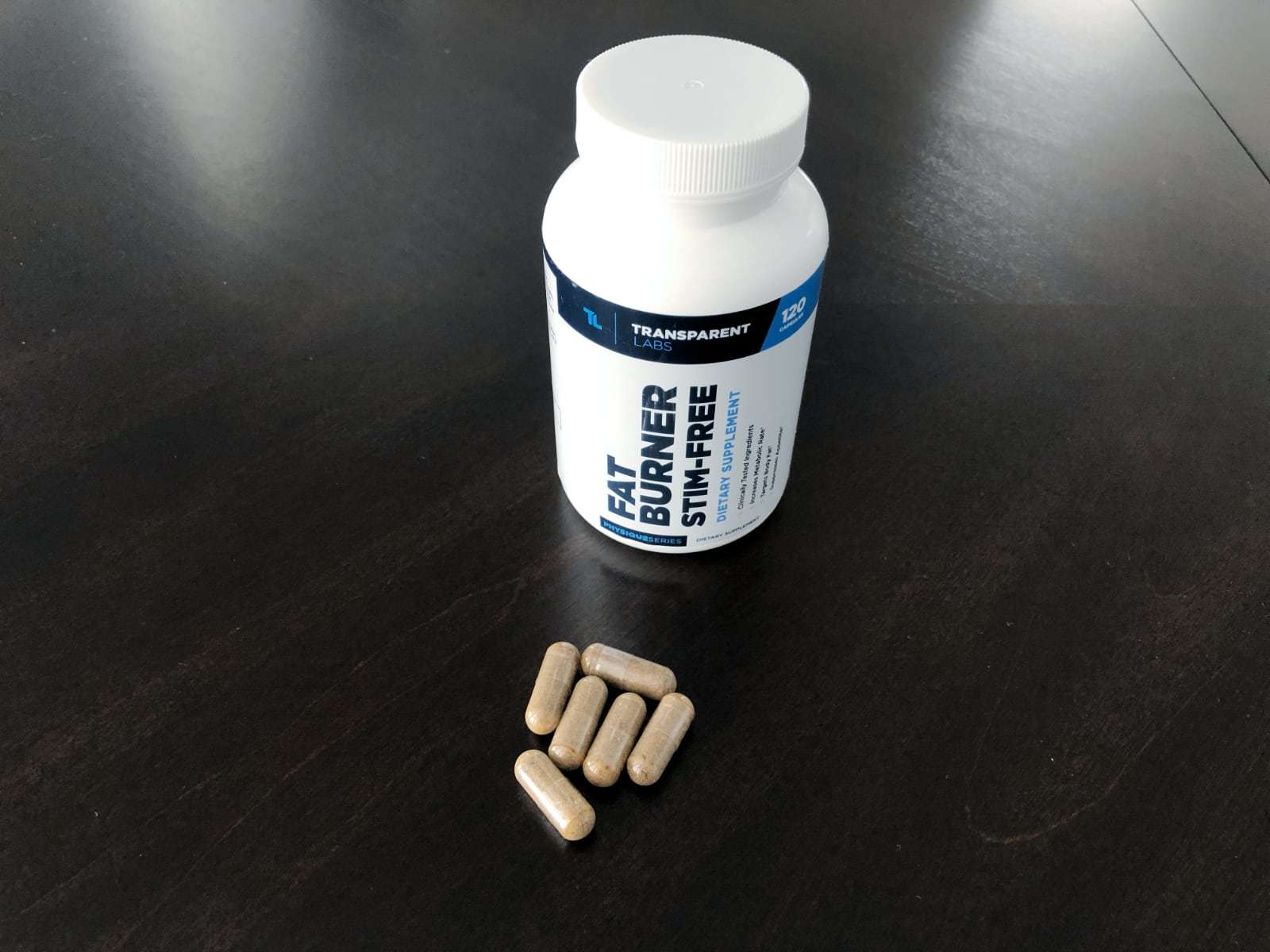 Transparent Labs Fat Burner Stim Free optimises weight loss results by increasing basal metabolic rate. This refers to the amount of calories that the body will naturally burnt without exercising during the day. By achieving this, the product increases overall energy expenditure, ensuring that fat is burned more effectively.

Functions and benefits of main ingredients 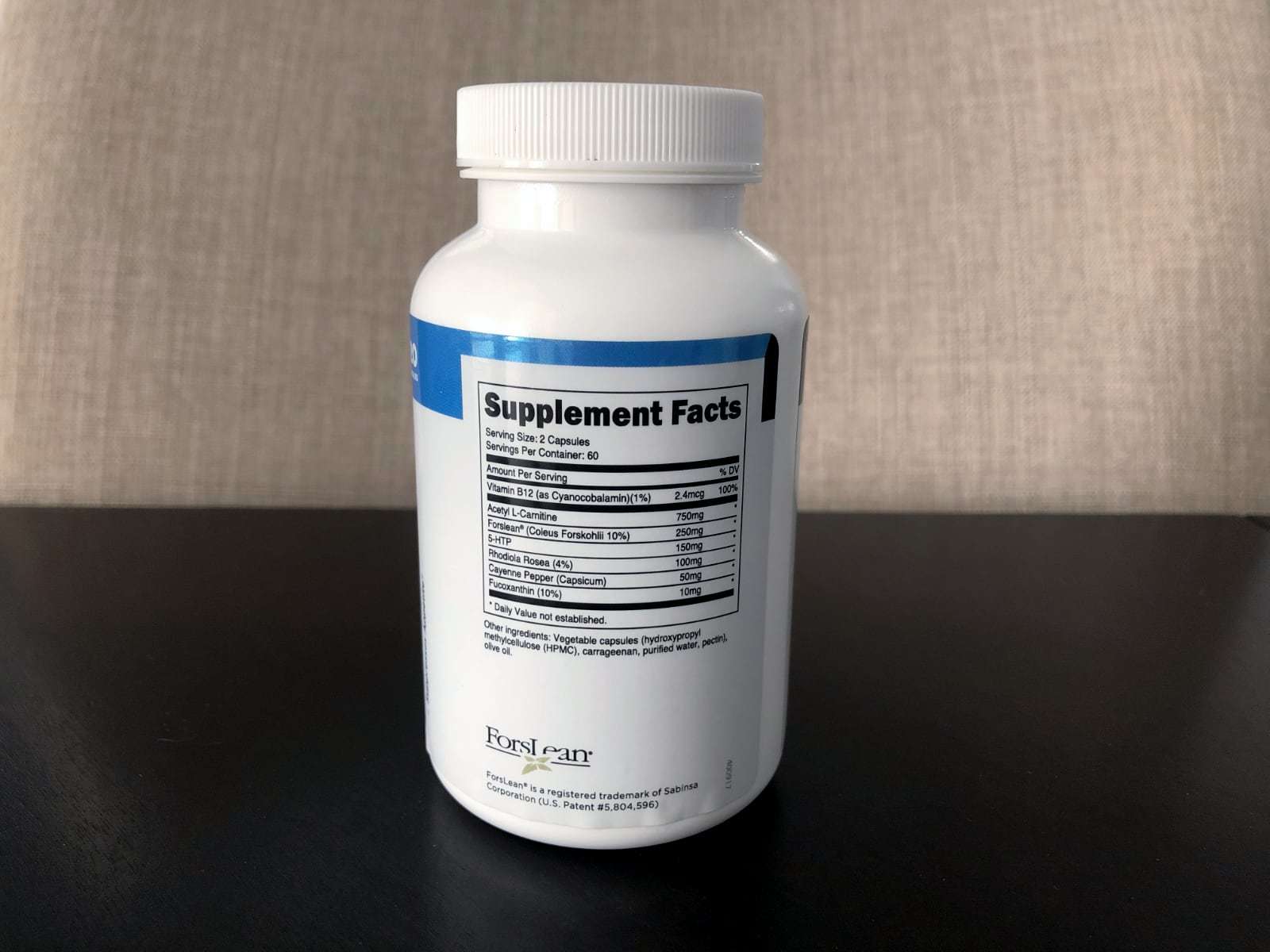 This amino acid is one of six ingredients included in Transparent Labs Fat Burner Stim Free which is intended to provide fat-burning qualities. This particular ingredient plays a key role in fat metabolism and other bodily processes, meaning that its inclusion can help stimulate weight loss.

Many people are suffering from a functional deficiency in this amino acid, meaning that they do not have enough carnitine in order to function at peak efficiency. This is important, as this substance help support energy production during exercise by enabling fat metabolism in the mitochondria via L-carnitine, while also improving ATP recycling via the acetyl group in acetyl l-carnitine.

Oral L-carnitine supplementation has been found to increase fatty acid oxidation in scientific studies, and therefore the substance can play a major role in fat burning and weight loss goals.

Forslean is a refined form of Forskolin - a stimulant that helps to release certain enzymes that promote weight loss in the body. Forskolin has performed extremely well in clinical studies, with research published in the NutraCos journal demonstrating that the substance was able to play a significant role in a group of women achieving an average of nine pounds of weight loss over an eight-week period.

Another study published in Obesity Research & Clinical Practice found that Forskolin supplements were able to decrease fat and increase lean muscle mass in obese man, when compared to a placebo. With 250mg per serving of the substance included in Transparent Labs Fat Burner Stim Free this is a big boost to fat burning.

5-HTP is known to deliver weight loss benefits in anyone undergoing a calorie-controlled diet. Clinical trials have shown that this substance can play a major role in reducing appetites, even in those that are morbidly obese. This is therefore a particularly valuable substance for anyone seeking to burn fat.

Sourced from Griffonia Simplicifolia, 5-HTP is the natural intermediate in the metabolism of tryptophan to serotonin. Transparent Labs Stim Free uses this substance in order to increase metabolism, target body fat, and reduce appetite, with this trifecta of qualities making a significant impact for both athletes and bodybuilders.

There are 150mg of 5-HTP included in this Transparent Labs product.

This product is particularly popular in the Asian subcontinent, although it is also found in Russia and Scandinavia. Featuring significant adaptogenic properties (non-toxic substances that help the body resist stress), Rhodiola Rosea has been studied for over 35 years, and has come to play a major role in the supplement industry.

This substance reduces the impact of physical and mental stress on the body, meaning that the anatomy is more able to deal with harsh exercise. Rhodiola Rosea treatment of white fat cells results in a higher conversion of triglycerides into energy, meaning that stamina is effectively increased.

Cayenne pepper extract is one of the better known supplementary ingredients included in Transparent Labs Fat Burner Stim Free, as the substance is often used in cooking. This is a natural high-quality source of capsaicinoids, which helps support fat burning and weight loss by using fat deposited in the body as energy. This has been heavily supported by over 90 clinical studies.

This substance is also often referred to as dietary red pepper, and has been shown by a variety of academics to play a beneficial role in weight loss and fat burning. PhysiqueSeries Fat Burner Stim Free contains 50mg of Cayenne Pepper per serving.

Fucoxanthin is a pigment that has been shown in animal studies to promote weight loss. It is believed that this is achieved due to elevated fat cell degrading enzymes prompted by the substance. Transparent Labs Fat Burner Stim Free contains 10mg of Fucoxanthin per serving.

Those initially taking Transparent Labs Fat Burner Stim Free should take 2 capsules with 8-10 ounces of water, twice daily. During this initial period, tolerance should be assessed, before the dosage taken is steadily increased. However, the manufacturers of the product note that users should have not consume more than two tablets in a four-hour period, or four tablets during a 24-hour period. 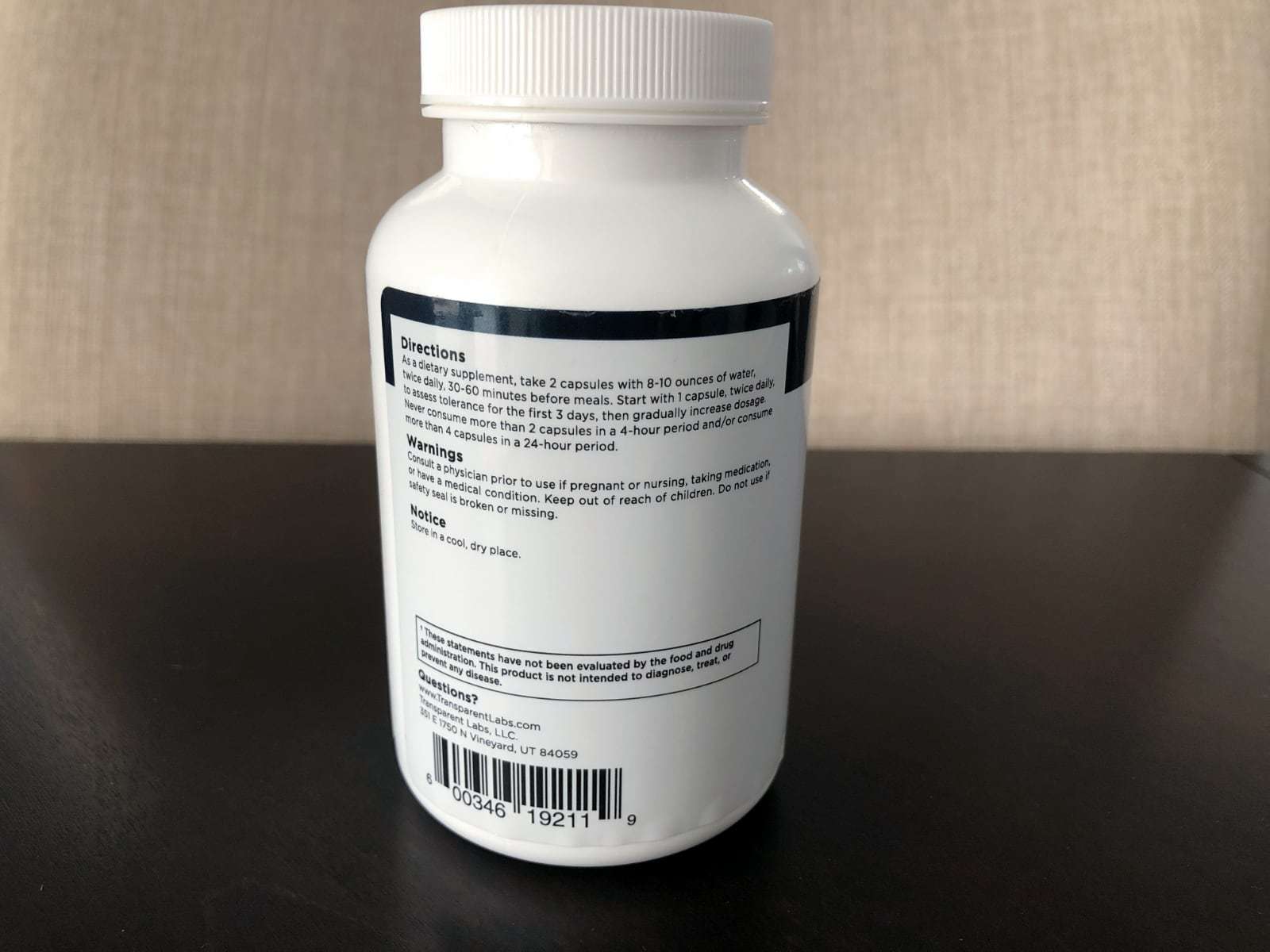 It is difficult to truly document the potential side effects associated with Transparent Labs Fat Burner Stim Free because these can vary quite significantly from one individual to another. Supplements can have different effects on the human anatomy, and it is advisable for users to consult with a physician before engaging in any process of supplementation.

However, one relatively common side-effect associated with this supplement is nausea. The manufacturers also note that the product should not be taken by pregnant women, as it can cause complications in pregnancy.

What customers are saying?

Customer response to Transparent Labs PhysiqueSeries Fat Burner Stim Free has been generally positive. The product has achieved excellent results in both real-world and testing conditions, while it also appears to have very few side-effects with users.

Is this product FDA approved?

This product has not been approved by the FDA, simply because dietary supplements are not currently subject to FDA approval. Transparent Labs Fat Burner Stim Free is among a category of supplements that only require FDA review if and when new ingredients are introduced. However, PhysiqueSeries Fat Burner Stim Free meets FDA regulations and quality standards for dietary supplements, and can definitely be considered an entirely safe product.

What’s the best time to take it?

The manufacturer states that the capsules should be taken approximately 30-60 minutes before meals.

Transparent Labs Fat Burner Stim Free is designed to support healthy weight loss, and has the added boost of containing zero stimulants. Both the products essentially have the same goal, but those wishing to avoid stimulants should opt for the Stim Free option.

With a unique combination of clean and natural fat burning ingredients, Transparent Labs Fat Burner Stim Free can be considered an excellent option for both athletes and bodybuilders seeking to reduce their levels of fat.

With its 100% transparent formula, six naturally occurring science-based ingredients, and zero fillers and harmful additives, PhysiqueSeries Fat Burner Stim Free has many admirable qualities. It is fully conversant with a vegetarian diet, and overall provides a clinically approved supplementation to any healthy diet.