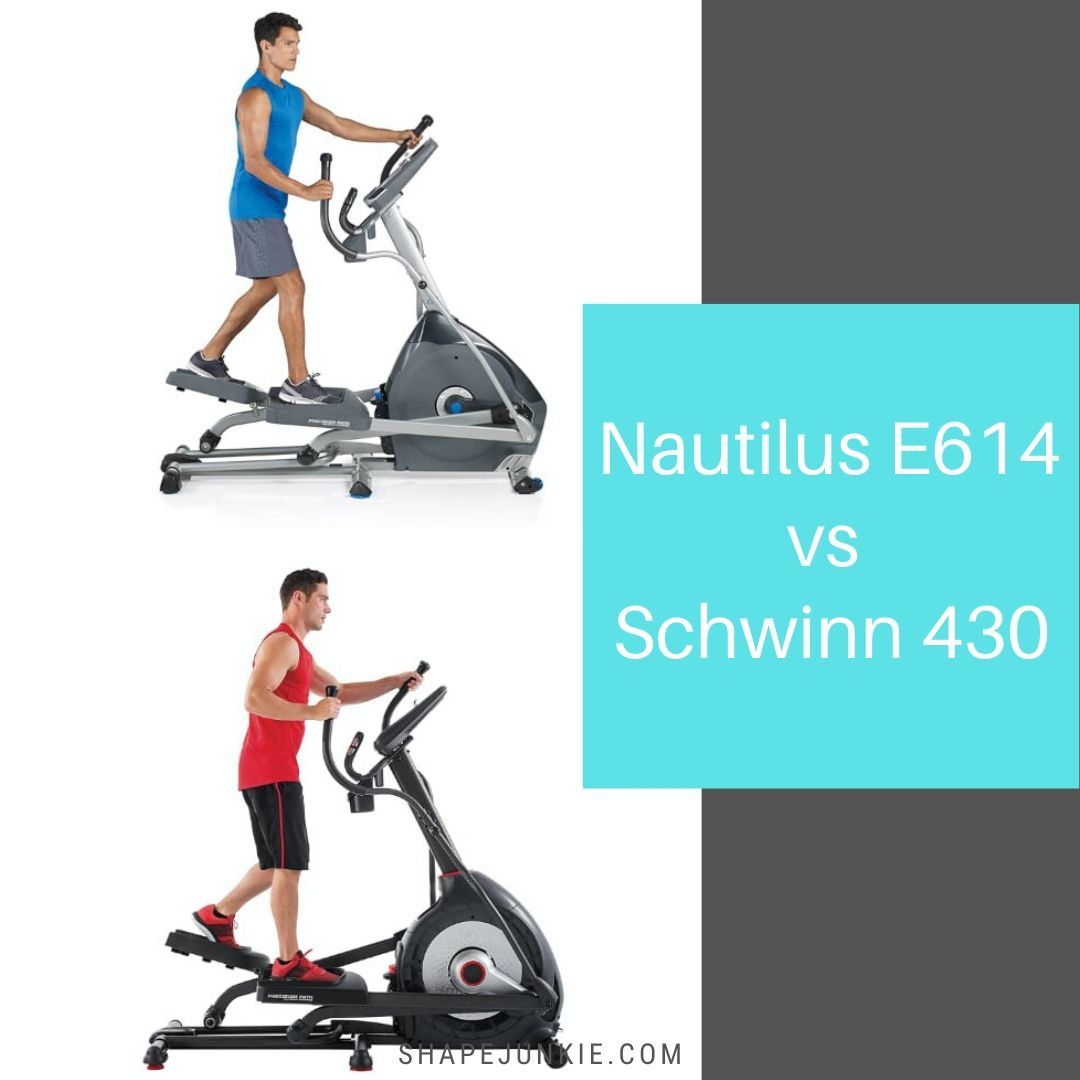 If you’re in the market for a highly functional, solid elliptical but don’t want to pay more than a thousand dollars, there aren’t that many options. Sure, there are a number of models in that budget but most of them are not able to perform at a high level.

Two that can are the Nautilus E614 and the Schwinn 430. In this article, we put these two ellipticals head to head to see which one comes out on top.

The Schwinn 430 and the Nautilus E614 are both from the same parent company, Nautilus. They both have handlebar pulse sensors but no ability to pair with a chest strap heart rate monitor. Neither do they have a backlit screen nor are they Bluetooth enabled. The only real difference is that the E614 provides you with a greater degree of incline adjustability than the Schwinn 430. It gives you a 30 degrees incline compared to 10 degrees for the Schwinn. That makes the Nautilus E614 a better option for people interested in a more intense workout.

Both of these ellipticals have a maximum user weight of 300 pounds. Considering that you should leave a differential of 50 pounds between the stated max weight and the actual weight used, both machines will safely accommodate users up to 250 pounds. 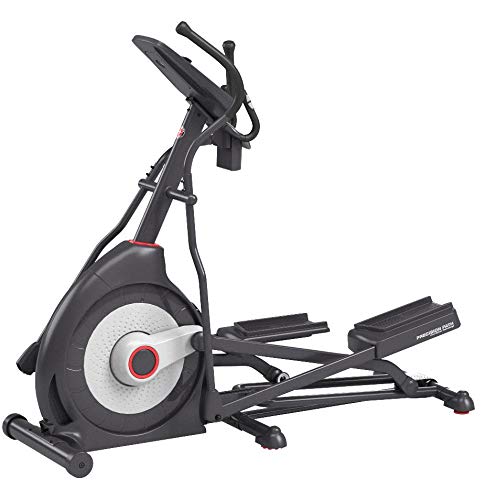 You get 22 workout programs built into the Schwinn 430. These are the programs that you get: 9 profile; 8 heart rate control (4 Beginner; 4 Advanced); 2 fitness tests (1 Beginner; 1 Advanced); 1 quick start and additional features.

There are also two user profiles to allow for multiple user data tracking.

The Nautilus E614 also provides you with 22 workout programs. On this machine, you get 8 heart rate control, 2 fitness tests, 1 quick start and 2 custom programs that you can customize according to your own specific requirements.

In terms of user-friendliness and workout variety, they are both on a par in terms of built-in programming.

The console on the Nautilus E614 provides you with dual LCD windows to provide you with feedback on 13 training data points. You can store data profiles for two users on this console. Both this console and that of the Schwinn 430 does not have Bluetooth connectivity. The console on the Schwinn 430 looks very much like that on the E614, also featuring a dual LCD screen with 13 data points, two user-profiles and a tablet shelf. 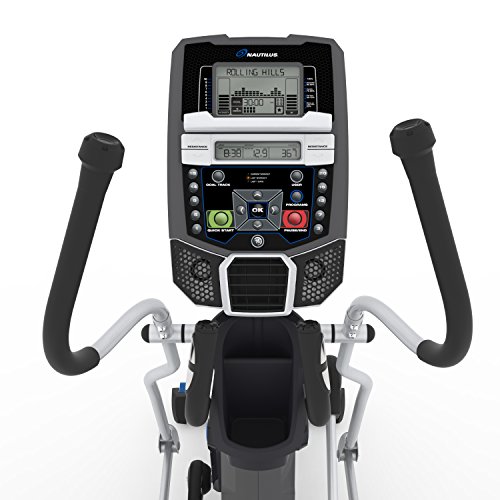 This is the one area where we see a major point of difference between the Nautilus E614 and the Schwinn 430. Neither of them has auto incline adjustability so you have to do the change manually, which is a hassle, especially if you are doing HIIT style training. Both machines provide you with six incline levels. 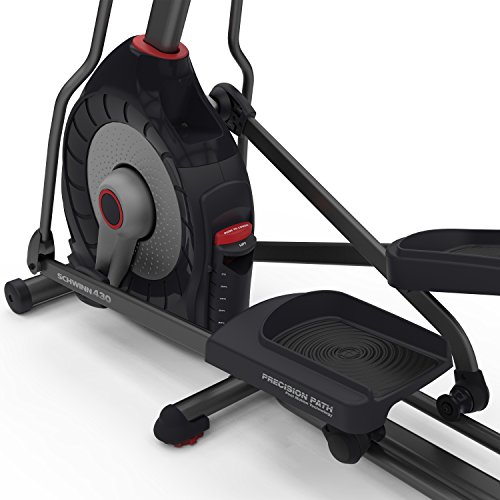 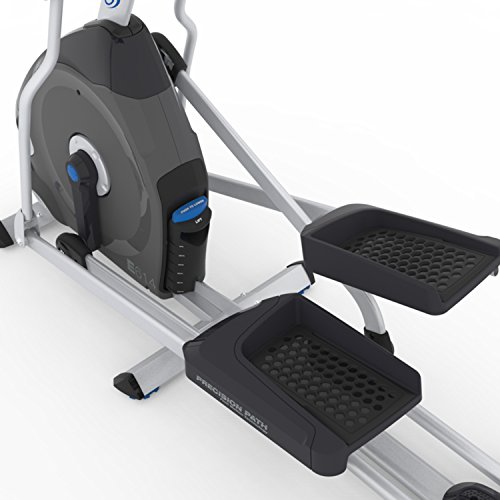 Both the Schwinn 430 and the Nautilus E614 provide you with the same warranty. This is not surprising since they both come from the same parent company. Here are the warranty terms on both machines:

Those conditions are not outstanding but are about what you would expect for an elliptical in the price range of these two machines.

Both the Schwinn 430 and the Nautilus E614 are solidly built machines. They both have solid frames that can stay stable even when you are training at the top resistance level and the max incline/decline. The Schwinn 430 features large cushioned footplates, a high speed, high inertia drive system to provide an easy startup and a smooth elliptical motion. There is also a media shelf to allow you to safely support your tablet while exercising.

The Nautilus E614 also has custom non-slip footplates, a comparable high- speed inertia drive system and a media shelf. Both machines provide a 20-inch stride length, which is pretty standard.

What Others Are Saying

Online reviews from verified buyers of the Nautilus E614 were generally impressed with the sleek, solid design and build of the machine. The 30-degree decline capability of the E614 was also appreciated. A number of buyers also recognized that the E614 represents good value for money. On the downside, some buyers were not happy with the lack of auto incline and wireless heart rate monitoring.

Purchasers of the Schwinn 430 commented on its smooth, quiet operation, along with the sturdy build and stability when in use. However, there were also comments about the difficult assembly, the lack of auto incline and the inaccurate EKG handlebar pulse monitors.