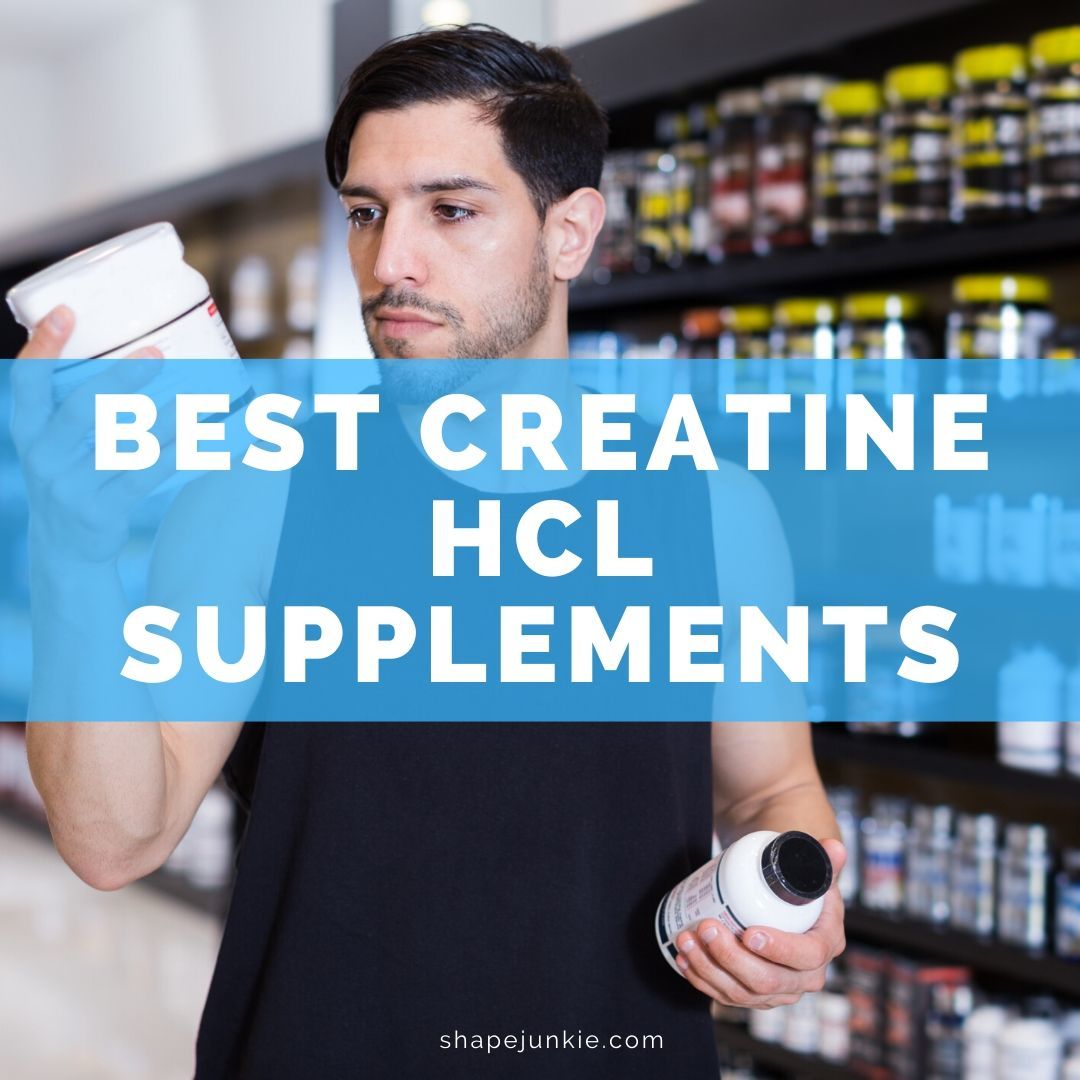 What is Creatine HCL?

Creatine HCL is a form of creatine solution, which is actually less commonly seen than creatine monohydrate. But creatine HCL offers several advantages over other forms of creatine, making it an ideal choice for athletes and bodybuilders.

Where creatine HCL differs from some of the more common creatine products is by attaching a hydrochloride molecule to enhance the stability of the formation. Sports scientists and athletes recognize creatine HCL as being among the most efficient effective supplemental ingredients involved with improved performance.

The first obvious health benefit of creatine HCL is that it helps muscle cells produce more energy. Creatine HCL supplements increase the phosphocreatine stores of your muscles, increasing muscular endurance. This is due to the fact that creatine HCL aids the formation of adenosine triphosphate.

Creatine HCL also supports many other functions in muscles, altering numerous cellular pathways that lead to new muscle growth. It also stimulates several biological processes which then lead to increased muscle growth and size. This means that creatine HCL plays a key role in improving high-intensity exercise performance, and a wide variety of studies have pointed to this quality.

Aside from this, the substance is also able to improve athletic performance in a wide variety of disciplines, including: 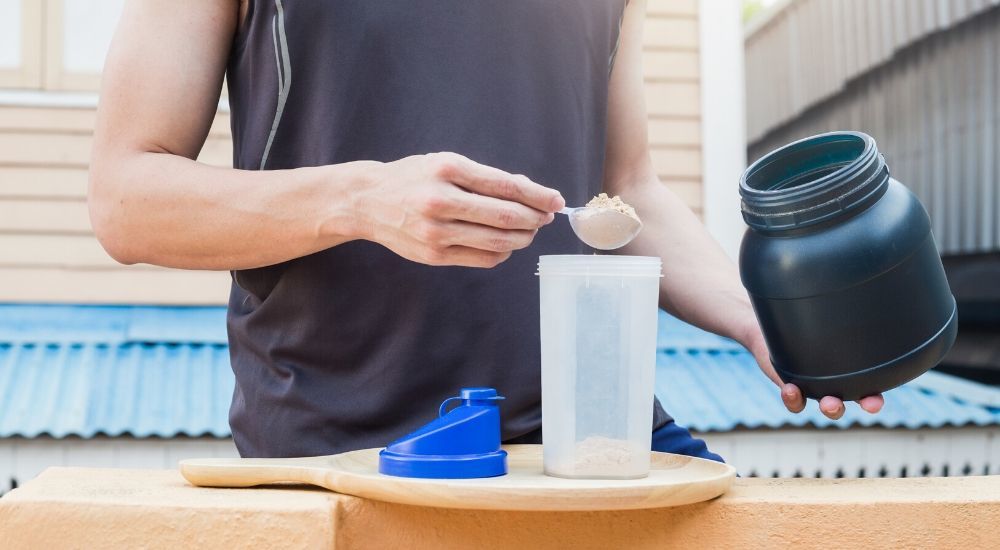 While there have been many studies assessing the athletic benefits of creatine HCL, one recent review discovered that the substance improves high-intensity exercise performance by as much as 15%. In another study focused on a six-week training program, participants who use creatine HCL added 2kg more muscle mass than the control group.

Another interesting health benefit of creatine HCL is that it has been shown to assist with treating Parkinson's disease. This tragic neurological condition is characterized by reduced levels of dopamine; a key neurotransmitter in the human brain. Taking creatine HCL has been shown to have beneficial effects in mice with Parkinson's reducing the fall in dopamine levels by as much as 90%.

Humans suffering from Parkinson's are often advised to engage in weight training, to treat the loss of muscle function and strength in their bodies. And creatine HCL can play a major role in this process, helping to ward off issues with Parkinson's disease. In one particular study, individuals suffering from Parkinson's combined creatine HCL with weight training, and were able to improve both their strength and daily functioning.

Similarly, creatine HCL can also play a role in fighting other neurological diseases, including Alzheimer's, epilepsy, ischemic strokes, and brain or spinal cord injuries. Creatine HCL has also been shown to be effective in treating amyotrophic lateral sclerosis, with one study suggesting that it reduced harmful episodes related to this condition by 17%. 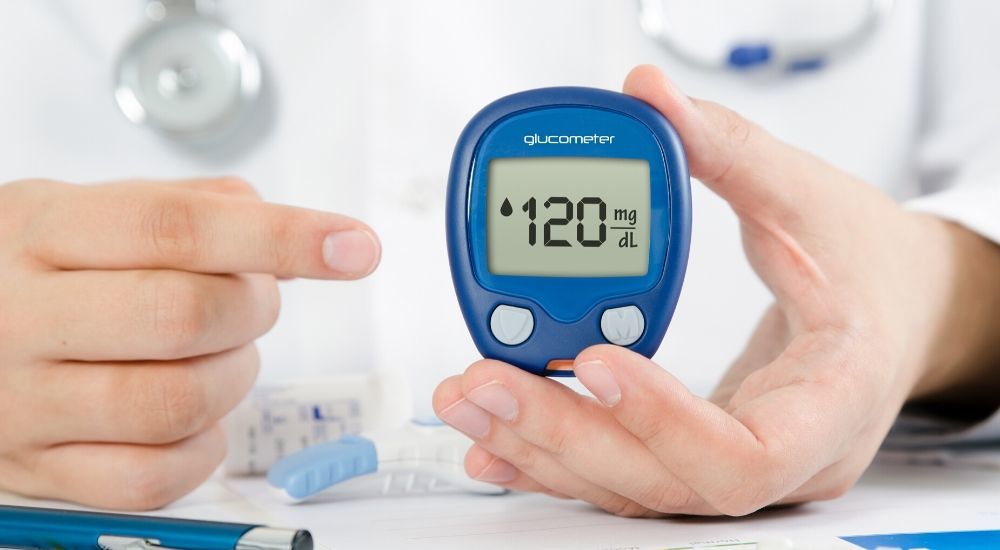 Creatine HCL is also associated with improved brain functionality, with several studies suggesting that supplements can particularly increase phosphocreatine stores in the brain. And creatine HCL can also play a central role in reducing fatigue and tiredness, with a six-month study producing an impressive 50% reduction in dizziness in individuals supplemented with creatine HCL during the research. Creatine has also helped to reduced fatigue in athletes engaging in endurance events such as cycling and has been used to decrease fatigue when exercising in high heat.

These are just some of the many health benefits associated with creatine HCL.

So now that we've learned all about creatine HCL, let's take a look at some of the top supplements available. 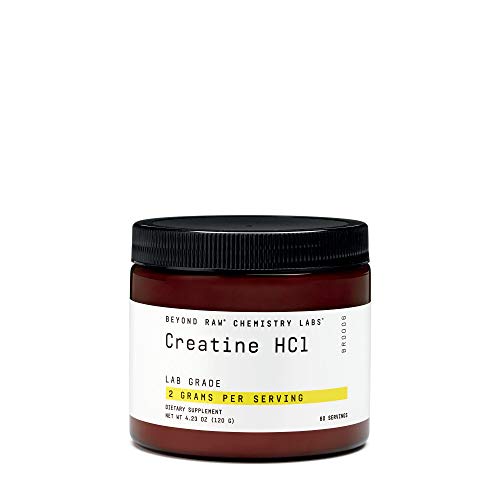 Beyond Raw Creatine offers 4 grams of micronized creatine hydrochloride per serving, which helps athletes benefit from an immediate boost of energy. The product also assists with cellular hydration, and is ideal for those competing for intense and explosive events, such as weightlifting and sprinting.

This is also an easy product to mix, as you simply scoop 1 serving of the flavorless Beyond Raw Creatine 8 oz of water or your favorite beverage, and you're good to go. The product is also gluten-free, adding to its health benefits. 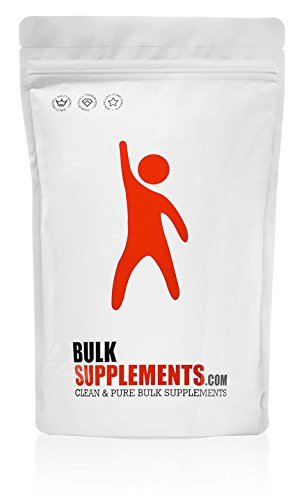 BulkSupplements Creatine HCL Powder offers 1kg of exercise-boosting powder per purchase, with a guaranteed 99.99% pure micronized creatine HCL. The credentials of this product are particularly impressive, as it has been laboratory tested, to verify the contents and guarantee purity.

This creatine HCL product promotes high-intensity energy workouts and helps athletes and bodybuilders to increase their strength and power. This non-GMO product outperforms monohydrate solutions and is based on virtually pure creatine HCL, providing athletes with the ultimate boost to their performance. 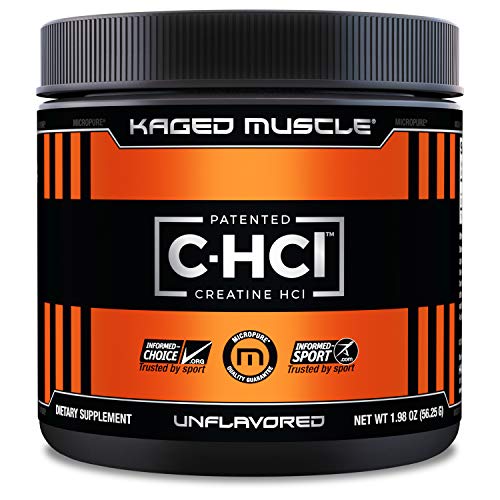 This particular creating HCL powder is highly popular with athletes and bodybuilders, thanks to its excellent solubility. KAGED MUSCLE, Creatine HCL Powder is a pure creatine product, with 100% transparent labeling, which makes it clear exactly what has been included in the powder.

The manufacturers of KAGED MUSCLE, Creatine HCL Powder are so proud of their product that they have patented some of the ingredients. This high-quality powder enables you to skip the loading phase that is often associated with creatine products and go straight to muscle building.

KAGED MUSCLE, Creatine HCL Powder is completely free from banned substances, but more information about its gluten, GMO, and additive status would be appreciated. 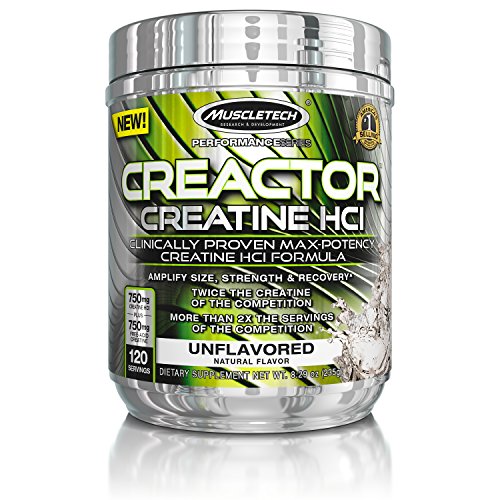 This product delivers a potent dose of lab-tested creatine HCL. Each serving of MuscleTech Creator delivers 750 milligrams of ultra-pure creatine HCL, enabling athletes and bodybuilders to get a boost in performance.

Just two concentrated scoops of around 2 grams of MuscleTech Creator powder is enough to gain the benefit from this product, which is completely free from GMO, additives, acids, and salts. This is undoubtedly one of the most highly-regarded and powerful creatine HCL products on the market, delivering a purity that few competitors can match. 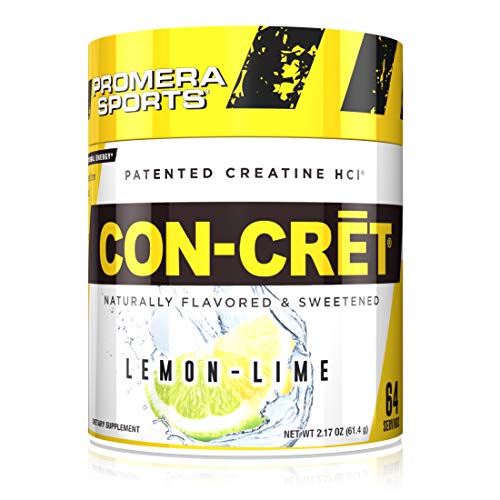 Promera Sports' creatine HCL product is highly soluble and absorbable, meaning that it can be added to any drink with easy. Based on 2g dosages, Promera Sports CON-CRET adds explosive energy to your workouts, both enhancing performance and improving recovery time.

Completely free from fillers, contaminants, flavorings, additives, and sweeteners, this is an extremely pure powder, which is also FDA-compliant, and GMP, HACCP, and SQF-certified. Promera Sports also offers a 30-day money-back guarantee, meaning that there are few risks associated with purchasing this outstanding product.

How to take Creatine HCL

What is known is that it is better to take creatine HCL shortly before or after exercise and that this will achieve better results than leaving a significant period between exercising and consuming the substance. One possibility that helps to achieve this is to split the dosage of creatine HCL and take half before exercise, and the other half shortly afterward.

Most creatine HCL products are powders that can be added to various beverages, with the solubility of the substance being particularly high.

Creatine HCL is generally considered to be a safe substance, which is particularly beneficial for those seeking a short burst of speed of muscular impact. Evidence suggests that it will have little adverse effect on most people's bodies, however, those with kidney disorders, or at risk of developing them, should speak to doctors before engaging in a program of creatine HCL.

And the substance can also interact with nephrotoxic drugs, caffeine, and ephedra, so it is certainly advisable to avoid using any of these substances when engaging in a creatine HCL program.

Since a 2007 GMP ruling, regulatory adjustments related to the supplement industry have evolved considerably. There are significant expertise and expense involved in the manufacturing of the raw ingredients that go into supplements such as creatine HCL, and this means that the industry has become separated into three main sectors.

Raw ingredient manufacturing associated with creatine HCL is a vast-scale chemical processing operation, which is highly-specialized and requires expert scientists. Contract manufacturers are also usually involved, and there are hundreds of these based in North America and Europe, which effectively work as intermediaries between the raw ingredient companies and supplement brands.

And the supplement brands themselves are the front-end of the creatine HCL business, with the companies and manufacturers involved deciding on the formulations of products that are ultimately put on sale.

So that's the lowdown on everything that you need to know about creating HCL, and some of the top products available. It's certainly a substance that can be highly beneficial for those who work out on a regular basis, and the options available mean that you can pack in the creatine, without having to look far and wide for a solution.