The dietary supplement market is worth billions of dollars annually worldwide, and there is a good reason for this. Even the most conscientious people find it difficult to extract all of the required nutrients from diet alone. Therefore, it has been recognized for some years that dietary supplements can help fill the gaps in an individual's nutritional intake.

This means that a majority of the population now takes some form of dietary supplement, with many of these people finding such supplements to be an essential part of their overall wellness regime. For example, a survey conducted by the Natural Marketing Institute discovered that 60% of people currently taking dietary supplements considered them to be important for the overall health and wellness, with another 20% mentioning the prevention of disease.

Science has supported the usage of dietary supplements as part of health programs. Numerous studies have found that supplementing the diet with suitable supplements can assist people with a wide variety of health conditions, and particularly help with those deficient in a particular vitamin, mineral, or other beneficial substance.

However, the commercial value of the dietary supplement marketplace means that many products have appeared that are less than beneficial to health. In short, there are a wide variety of charlatan substances available, and it is therefore important for those taking dietary products to choose vitamins or supplements of the highest quality.

One important substance that can help with overall health is glutathione. This substance is derived from three amino acids, namely cysteine, glutamate, and glycine. Glutathione is an important antioxidant in the body, combating free radicals, and ensuring that your body's cells function optimally. The substance also plays a role in numerous chemical reactions within the body, assisting with the fending off of detoxifying chemicals.

It is notable that the level of glutathione in the body will diminish during old age, although the precise reasons for this are not understood. The likelihood is that the body is simply unable to produce as much of this substance as it ages. And it is known that lower levels of glutathione are strongly correlated with diminished health, with the substance associated with many conditions likely to develop in the elderly in particular. Glutathione has many positive benefits on the body, but one of its most notable properties is its ability to reduce inflammation. It has been proven that glutathione reduces oxidative stress in the body, which helps to reduce the risk of inflammation, cancer, brain damage, and a raft of other serious health difficulties.

Furthermore, glutathione can block the production of the majority of inflammatory cytokines. If left unaddressed, cytokines will keep the body in a constant state of low-grade inflammation. Scientific tests have demonstrated this in both human and animal studies. And it has since been established that raising glutathione levels in the body will lower inflammation, although it is still important to address the underlying cause of the issue as well. There have been a variety of other reasons that people have chosen to take glutathione tablets, including mitigating against the harmful effects of radiation and chemotherapy for cancer and to treat the immune system and infertility. The medical evidence is certainly less supportive that the substance can assist with any of these problems, but a small study conducted recently did find that glutathione administered intravenously was found to improve pain-free walking distance for a group of people suffering from skeletal difficulties.

It should also be noted that other supplements can help stimulate the body's production of glutathione, and can, therefore, be used in conjunction with a dietary supplement. These include:

Because glutathione isn't absorbed particularly well directly from foods, dietary interventions can often be unsuccessful with this particular substance. However, unprocessed meat, garlic, broccoli, asparagus, avocados, and spinach are all cited as good ways to supplement glutathione production. 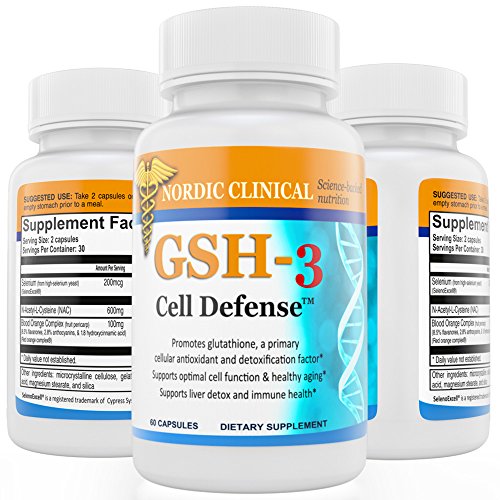 Reviews of Nordic Clinical’s GSH-3 Cell Defense have been extremely positive, with customers reporting several vital health benefits. Among the benefits reported by those taking the supplement our improvements in breathing and vision, along with reduced pain and symptoms associated with information. Many patients also reported an energy boost from taking this particular supplement.

It is important to note that there are also side-effects associated with glutathione. Taking the substance over a longer period of time has been linked to diminished zinc levels, which can contribute to some health implications. It is also important to take this substance in a responsible fashion, as inhaled glutathione has been linked with asthma attacks, and can also causing wheezing as well.

Women that are either breastfeeding or pregnant are also recommended to avoid this substance, and it is always advisable to discuss any supplements that you may choose to take with a physician before doing so. This will enable your doctor to check on any potential side-effects, or interactions with any medications that you're currently taking, as well as implications for existing medical conditions.

But, overall, the evidence is clear that Nordic Clinical’s GSH-3 Cell Defense is an outstanding healthcare product, and a dietary supplement that everyone should consider, particularly as inflammation is a chronic problem across the population as a whole.