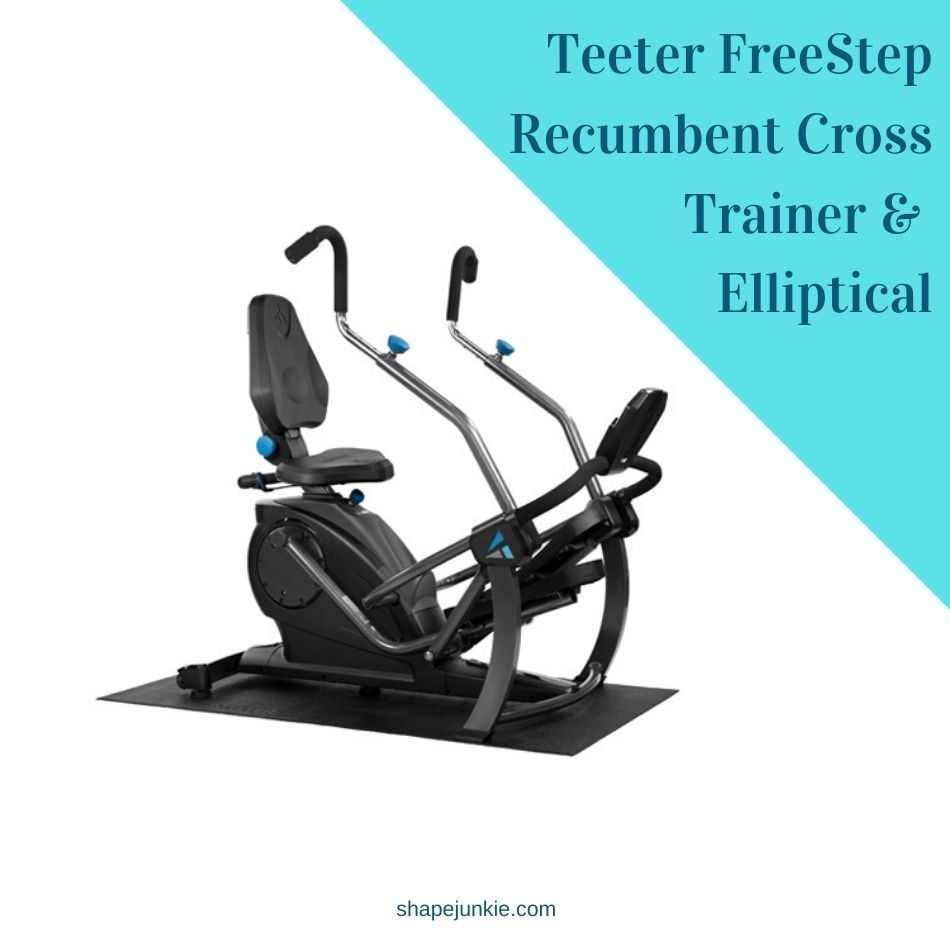 Recumbent or seated elliptical trainers are excellent cardio machines that could be a great addition to your home gym. They’re frequently used to rehabilitate people whose lower extremities have limited mobility due to injury, stroke, or other issues.

They’re often referred to as hybrid (similar to the Body Power Trio Trainer), "two-in-one" machines because they’re a combination of a recumbent (reclining) and elliptical (simulates walking, stair-climbing, or running) bike. They have movable handlebars to work out the upper body, a back-supported seat that minimizes the impact on one's lower body, and pedals like traditional ellipticals.

Teeter, which is a brand better known for its inversion tables, is a provider of various types of products that support people who are recovering from mobility-related injuries.

The firm's line of equipment was born out of founder Roger Teeter's own back issues. An engineer by profession, Teeter started with the design of inversion equipment after finding relief from his own lower back pain as a competitive water skier via inversion therapy and gravity boots. 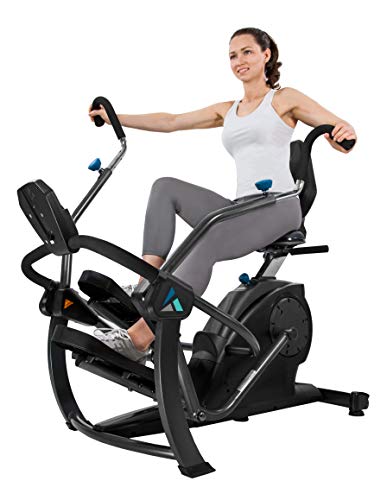 The FreeStep Recumbent Cross Trainer was created to address the needs of individuals with joint pain, knowing that joint issues can lead to a downward spiral of inactivity and poor health. FreeStep is, therefore, a friendly exercise option for people who want to stay fit and keep their core muscles strong but need to avoid back and lower body injuries. 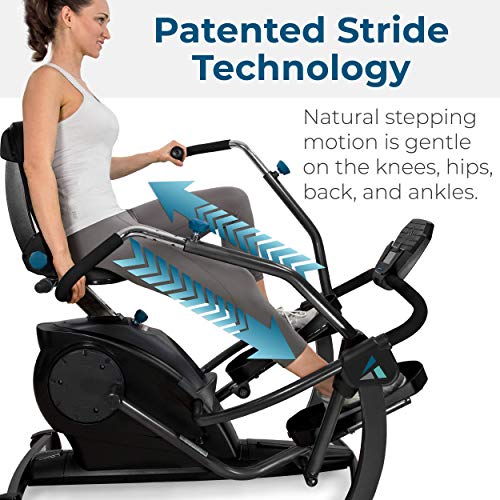 It’s particularly ideal for maturing adults as it provides a gentle but effective workout for your lower body due to its natural stepping motion that follows a smooth linear path. It avoids the negative effects produced by the cycling motion when using recumbent bikes: knee shear or pain resulting from downward exertion of upper legs and upward exertion of lower legs, and hip strain caused by usual side-to-side motion that comes with cycling. 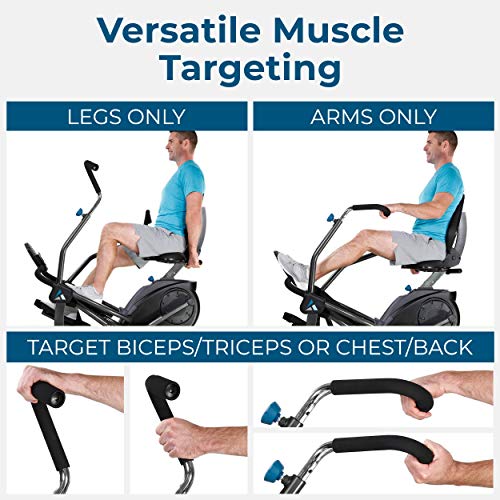 The FreeStep is designed with push-pull mechanics that distribute muscle exertion throughout your body. 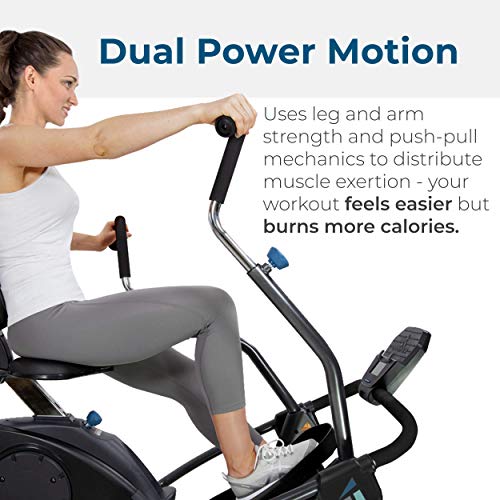 You can target your upper body alone during an exercise session or focus on using the handles if you become tired of pedaling. The handles can be adjusted to give your biceps, triceps, and back muscles a better workout.

FreeStep aligns the body to best reduce stress on your knees. The seat has three levels of recline and can be raised to suit your height.

A magnetic resistance mechanism provides variable resistance to the FreeStep. The mechanism is friction-free, so it's "whisper quiet." Simply move the dial at the back of the seat to set the machine to your desired intensity.

The magnetic resistance unit is also long-lasting; they are tested to 2.3 million cycles.

You can monitor your calorie burn, speed, distance, and time using FreeStep’s digital monitor, which has a stand on top where you can place your tablet or another smart device. 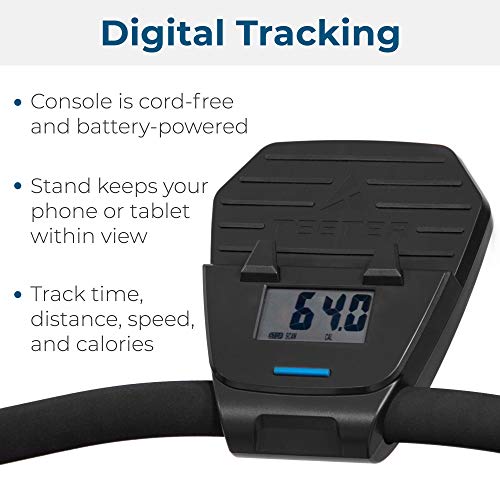 Space is available for your water bottle just below the seat so you can easily rehydrate while working out.

The transport wheels found at the back of the machine's rear stabilizer will help FreeStep owners move the equipment more easily when it needs to be tucked away for storage.

When fully assembled, the FreeStep stands 52.5 inches if the handles are upright. It measures 54 inches long and 38 inches wide. It weighs 110 pounds and can support users weighing as much as 300 pounds. 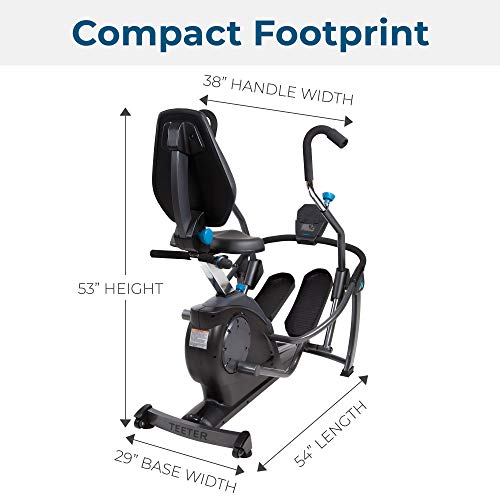 The FreeStep is backed by Teeter's over 35 years of experience in manufacturing superior-quality products for back pain relief. Teeter explained that the company based the technology on machines found in physical therapy (PT) clinics. The company then brought its product to the Colorado Center for Health and Sports Science for testing. Trials showed that using FreeStep can burn 17.4% more calories in an hour compared to exercising with a recumbent bike.

Teeter offers free shipping and a one-year warranty for FreeStep.

The FreeStep may look like a complicated machine but buyers can assemble the equipment themselves with the help of the Assembly Instructions & User Guide.

For the handles, check Teeter's website for the various ways you can adjust them depending on the upper body exercise you wish to try. You can also check chief executive officer Riley Teeter’s short video regarding handle adjustments.

Various owners are pleased with how FreeStep helped them recover after injury or stay in shape amid joint problems.

A woman who broke her kneecap after a fall used FreeStep after completing her PT session. She said that the equipment functioned much like what she used in her post-injury therapy. FreeStep helped her transition into her normal routines, particularly with walking and going up steps.

A yoga enthusiast said that FreeStep was heaven-sent as a diagnosis that she had psoriatic arthritis made her feel depressed. She became proud of herself after being able to move again, after nearly a year of not being able to move due to arthritic pain. She also felt good that her muscles were engaged and toned just after a week of continued use of FreeStep.

Lastly, a user who spent 20 years in the Army admitted that his knees weren’t the same as they were in his younger years. With FreeStep, he’s glad that the equipment’s fluid and low impact features can help him achieve his goal of staying fit as he grows older.

Does the Teeter FreeStep include a heart rate monitor?

No, the Teeter FreeStep does not include a heart rate monitor. It does however have a display that tracks time, distance, and steps.

Can you stride in reverse as you can do on a stationary bike and some ellipticals?

Yes, you can reverse your stride on the Teeter FreeStep however it is not a smooth as with an elliptical or stationary bike.

Is the Teeter FreeStep good for helping you to lose weight?

How difficult is the Teeter FreeStep to assemble and does it require routine maintenance?

The Teeter FreeStep comes mostly already assembled with you only need to add the seat, console support bar and install the movable handlebars. The included instructions are clear and even the tools needed are included. Maintenance is also very low with you only needing to wipe it down after your workouts and occasionally check to ensure none of the parts are loose.

Is the Teeter FreeStep usable but someone who is short?

Yes, the Teeter FreeStep is usable by a wide variety of people with heights from 4'11' to 6'6'. The adjustable seat has 9 different positions allowing for almost anyone to use it. If your significantly under 4'11' or over 6'6' you may have some issues but that will be true with almost any recumbent bike or similar piece of exercise equipment.

Shape Junkie listed FreeStep among the best elliptical machines in an earlier article. As a piece of two-in-one equipment, it may be bulkier than other types of ellipticals. But due to its well-thought-of design, FreeStep can provide a natural, stepping down motion that some ellipticals—especially cheaper models—aren’t known to offer.

Teeter offers superior value for the price of FreeStep, which costs lower than other recumbent ellipticals.